Blog / Are tortoises the ‘hippos’ of Galapagos?

The Galapagos giant tortoise is one of the most famous animals of the Islands, with the Archipelago itself being named after them (Galapágo is an old Spanish word for tortoise). As well as being endemic to the Islands – meaning they are not found anywhere else on Earth – they are also very important ecosystem engineers that can greatly influence the areas they inhabit. Diego, a scientist in the Galapagos Tortoise Movement Ecology Programme team, explains a day in the life of a tortoise scientist, and whether tortoises the ‘hippos’ of Galapagos? 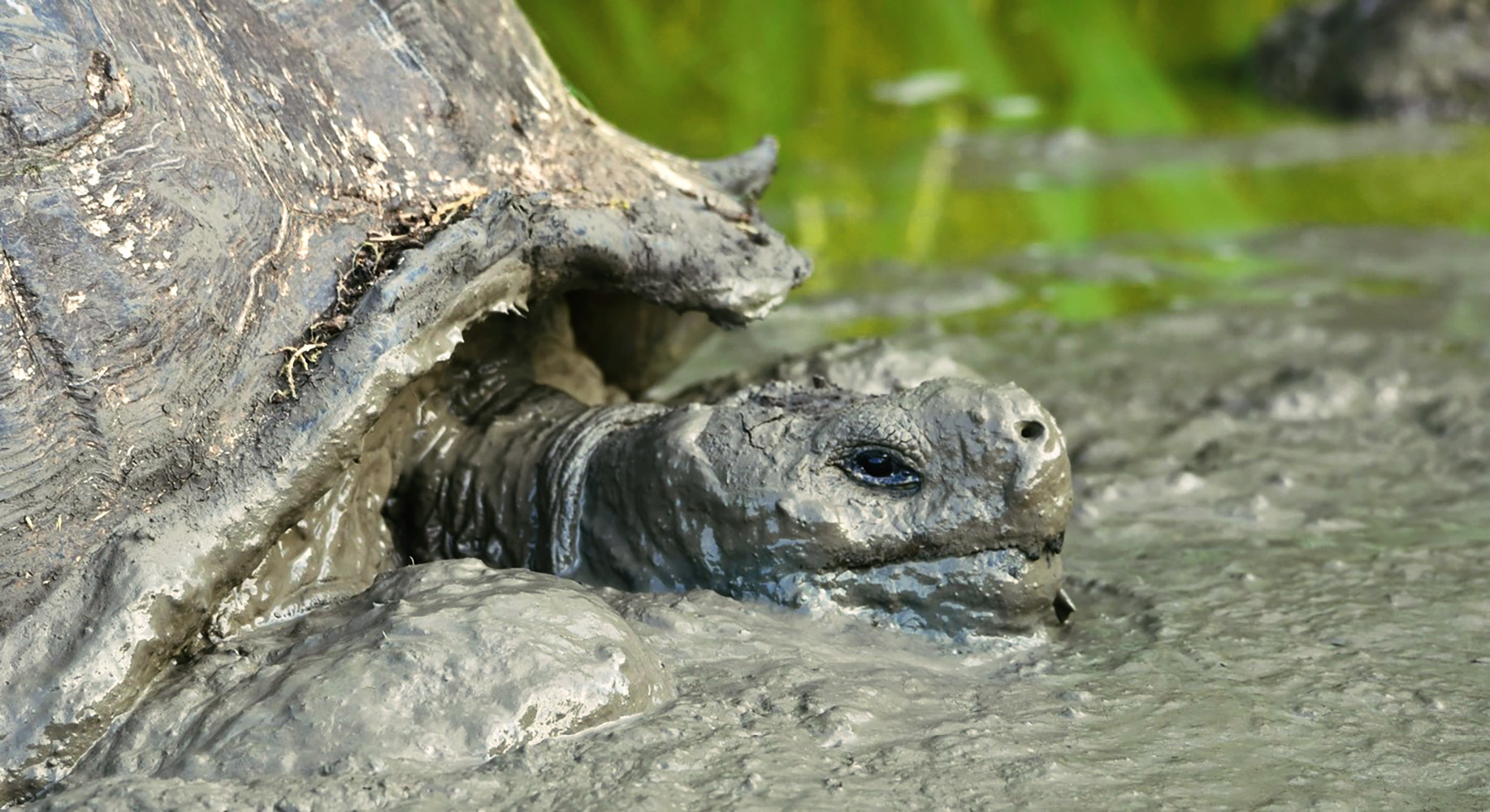 It was a cloudy and rainy day shortly after 6 am, when Freddy Cabrera, Jose Haro and I met up at a bus stop in Puerto Ayora to make our way to the humid highlands of the island. As usual, our day revolved around tortoises, but instead of a long walk to reach nesting sites, we chose the comfort of tourist ranches where ponds can be found.

These ponds have recently been of interest to the Galapagos Tortoise Movement Ecology Programme (GTMEP). But why are we interested in knowing how tortoises use ponds in Santa Cruz? What can be so exciting about it and why could tortoises be seen as hippos of Galapagos? One reason is tortoises are ecosystem engineers; organisms that can greatly influence the areas they inhabit. Another motivation is that we do not know how much “free fertilizer” -in form of urine and faeces – tortoises move around. This may be important in ponds that are often used by tortoises, as they move nutrients from the terrestrial ecosystems into these aquatic ones. This may be very similar to the influence of hippopotamus on their ecosystems which has been referred to as a ‘conveyer belt’ from terrestrial to aquatic ecosystems. Every day, thousands of hippos feed on grasslands and then defecate tons of nutrients (in the form of partially digested plant material) into the shallow pools where they enter to cool off. This massive input of fertilizers can stimulate plant and insect growth and change the oxygen level of the water. Tortoises in Galapagos could be doing something very similar!

One of the few known references about this process came from Charles Darwin’s diary in which the, at-the-time young naturalist, describes a Galapagos tortoise drinking from such a pond in the island of Santiago. Fast forward 186 years later, very little is known about the secret life of tortoises in ponds.

In 2019, we set a research question looking at this aspect of the tortoise’s life: their interactions with the ponds. To start, we dropped a water quality sampling probe into our first pond of the day shortly before 8 am. This allowed us to gain insights into how much oxygen there is in water, to know its pH, meaning how acid or alkalic water is- and to know other parameters related to water quality such as salinity. Through our measurements, we learned that the water had a temperature of 23°C and approximately 30% of dissolved oxygen concentration. Oxygen concentration is a critical parameter for assessing water quality, as several insect larvae (such as dragonflies’, which biologists call nymphs) need high amounts of oxygen to survive. Interestingly, during our sampling, we caught out and stored a coprophagous insect larvae in that pond, using a Ziploc bag! This means that this invertebrate relies on larger animal ‘poop’ for its food, most likely from giant tortoises. We also collected pond water in different bottles for future laboratory analysis to identify chlorophyl levels as well as total nitrogen, total phosphorus, and dissolved carbon concentrations.

With a simple but effective method, we then collected mud, scraping it off with a plastic spoon from the carapace of tortoises. We brought the scraped mud back to our lab at the Charles Darwin Research Station and let it dry in an oven. This way we learned that a large male tortoise with 141cm of carapace length was carrying 464 grams of dry mud on itself from inside to outside of our study pond! This is another example of how tortoises can modify their environment. While one single trip may not seem to represent that much, thousands of tortoises moving such amounts of mud on a weekly basis, can scale up to several tons of mud removed and displaced a year and can thus alter and engineer ponds as they go!

This ongoing research is assessing how tortoises use ponds, both in touristic ranches and in natural ponds, mostly within the Galapagos National Park areas. It is also known that during the cool-dry season, some touristic ranch owners may fill their ponds with water to prevent them from drying out while some natural ponds, without that treatment, dry out intermittently or completely during this time.

One of the challenges we are currently facing during the COVID-19 pandemic, involves shipping the pond samples to our collaborator’s Dr. Amanda Subalusky laboratory in Florida, USA. This step is needed to quantify stable isotopes in our samples, to analyze how much ‘fertilizer’ do the tortoises move from the terrestrial to the aquatic food webs; from the terrestrial vegetation area into the ponds. Next step in this research project will involve using game cameras to determine how many tortoises visit the ponds and how much time they spend in these sites throughout the year. Exciting discoveries await!

How you can help tortoises