For the second year running we are very excited to report increases in the critically endangered population of little vermilion flycatchers on Santa Cruz island. This is due to an ambitious experimental management programme led by the Charles Darwin Foundation (CDF) and the Galapagos National Park (GNP) to reduce the impacts of invasive species on this emblematic bird. 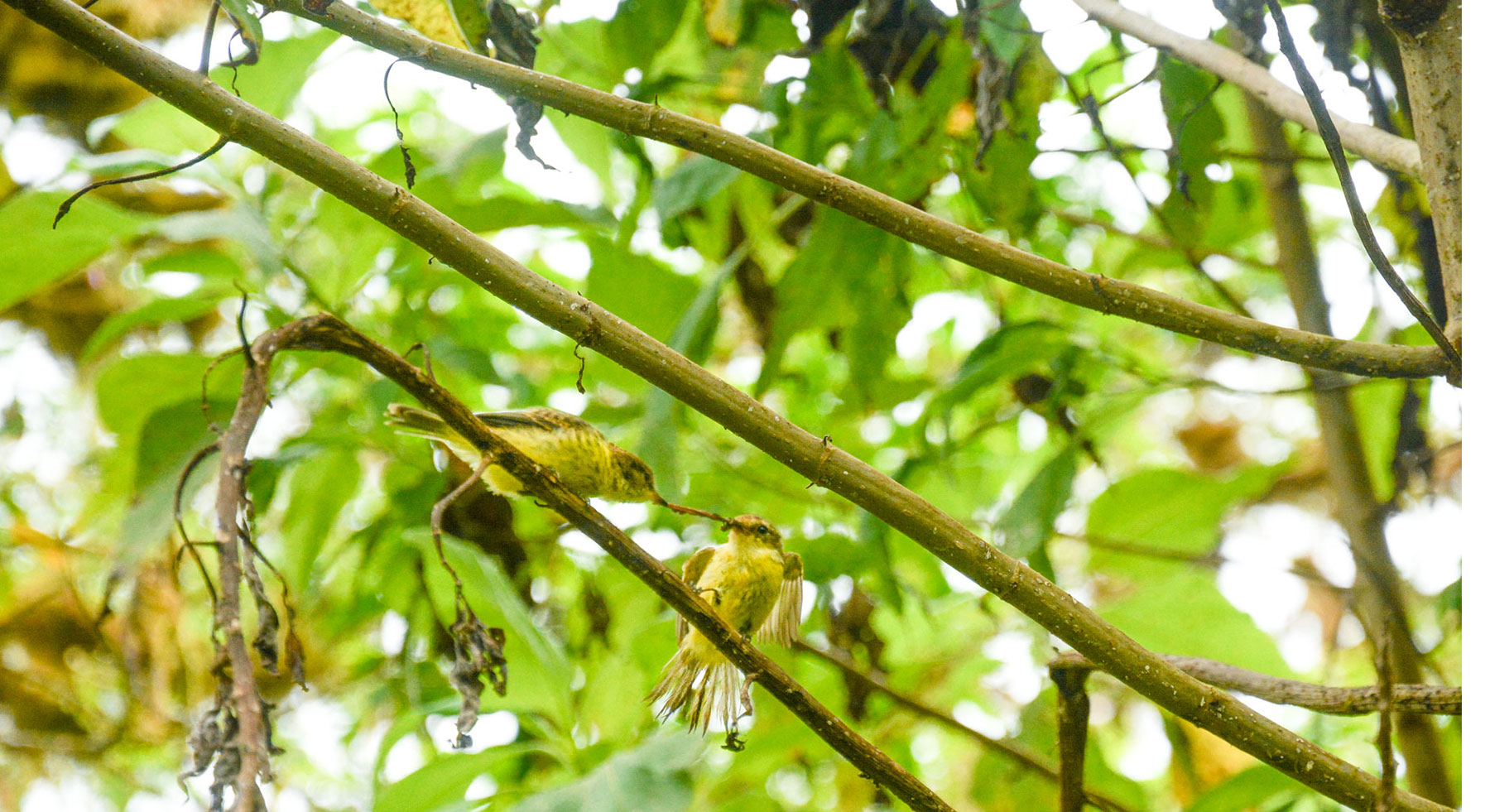 The little vermilion flycatcher, Pyrocephalus nanus, classified as Vulnerable by the International Union for Conservation of Nature (IUCN), has already vanished from Floreana island and is very rare on other large islands such as Santiago and Santa Cruz. On Santa Cruz, numbers have decreased dramatically over the last few decades, and scientists estimate that a maximum of 30 pairs remain. Most of these are found in the area of Mina de Granillo Rojo, a Scalesia forest overrun by invasive blackberry (Rubus niveus) and other introduced plant species. Find out more about this project.

The greatest threat to the little vermilion flycatcher is the avian vampire fly, Philornis downsi. However, nest treatments to remove fly larvae did not always ensure fledgling success or address the problem of nest abandonment. This suggested that there were other factors affecting this species. Based on observations of foraging behavior, scientists hypothesised that birds were not getting enough high-energy prey to feed chicks. After experimental manipulation of their immediate surrounding, habitat scientists determined that the dense stands of invasive blackberry were preventing parent birds from foraging on the ground for their preferred food, such as caterpillars and spiders.

In 2018, CDF and University of Vienna, together with the GNP, started a three-year holistic management programme that involved restoration of the Scalesia forest through blackberry removal, rodent control, and injection of a low-impact insecticide into the base of nests to reduce the number of avian vampire fly larvae. This experimental management plan has proven highly effective, and the population of little vermilion flycatcher on Santa Cruz island has increased steadily.

The males of the little vermilion flycatcher have a vibrant red chest and cap © Juan Manuel García, CDF

David Anchundia, a PhD candidate working on this project, said that “In 2020, these interventions resulted in at least six fledglings joining the population – we could not visit the remaining nests because of lockdown restrictions due to the COVID-19 pandemic. This year, eight birds fledged from the nests, the largest number since we started monitoring in 2017. This is good news, as each new fledgling gives us hope that we can keep this extremely small population alive.”

Importantly, these studies have shown that an integrated management approach, that includes habitat restoration, is needed to ensure nesting success. Without this holistic approach, nests are typically abandoned at a very early stage of incubation. In the six one-hectare experimental plots where invasive blackberry is being removed, scientists are now also seeing natural recovery of several endemic and native plant species including the threatened giant daisy tree, Scalesia pedunculata, Galapagos cafetillo (Psychotria rufipes) and tree ferns. As such, management actions are also benefitting the restoration of the Scalesia forest, one of the most threatened habitats in the Archipelago.

“These results are encouraging so we plan to expand the intervention area, which will contribute to increase the size of the population of this bird in the next season for the little vermilion flycatcher to regain its spaces on the island of Santa Cruz.” – Danny Rueda, Director of the Galapagos National Park.

What can you do to help?

Help us tackle invasive species in Galapagos, and protect endemic birds like the little vermilion flycatcher by joining up as a GCT member.